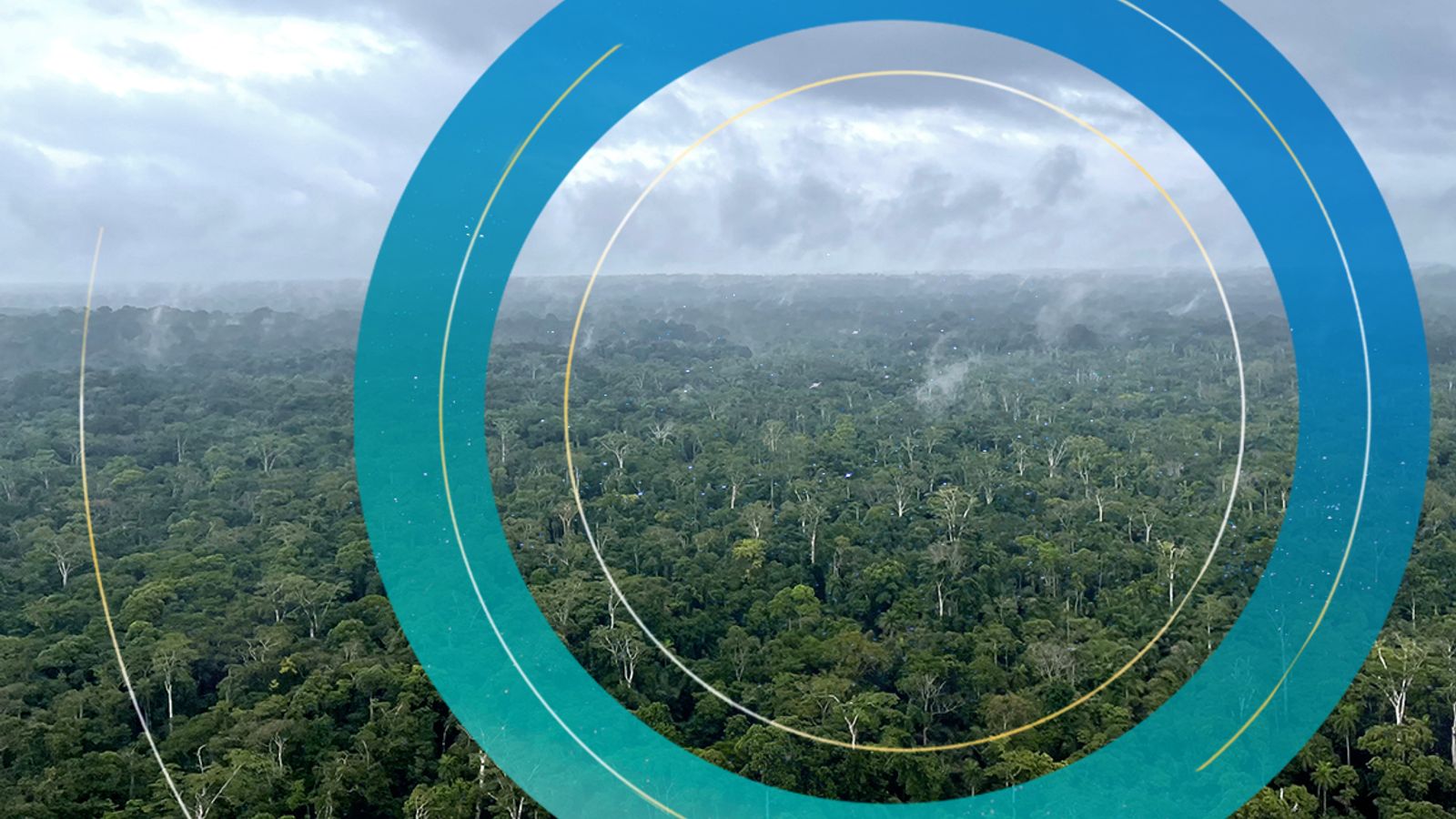 It will be “very, very difficult” to protect the Great Congo Basin rainforest unless countries like Gabon are properly rewarded for their conservation efforts, its environment minister has told Sky News.

The warning comes just weeks before the crucial UN climate summit known as COP26 is to be hosted by the UK in Glasgow.

Gabon is the chair of the African nations negotiating block at the summit, and so wields significant power.

Nearly 90% of Gabon’s landmass is covered in trees.

It is the second most forested country on earth, and forms part of the great Congo Basin rainforest that stretches across central Africa.

It is also one of a few nations on the planet that absorbs more carbon than it emits, absorbing over one hundred million tons of carbon per year – about a quarter of the UK’s annual emissions.

Apart from strict conservation laws, one of the reasons Gabon has avoided destroying its forests for economic gain so far is that it is an oil rich nation and has traditionally relied on that revenue stream.

But that won’t be the case for much longer.

The world is moving away from oil, prices are plunging and production is dwindling.

Minister Lee White said: “Because of climate change, the oil economy is gradually going to disappear.

“We have a young population… 2 million people, half of them under 20 years old.

“So we have to create jobs for all of those people.

“We have that double challenge; 60% of our economy is going to disappear in the next 20 years.

“We have to replace those revenues with something else.”

Gabon now finds itself at a crossroads: the easy option would be to allow commercial deforestation, the selling of valuable tropical hardwood timber and widespread agriculture.

This has happened with devastating environmental consequences in neighbouring countries like the Democratic Republic of Congo, and further away in Brazil.

But what Gabon is attempting to do is to find a way to make the ongoing preservation of its forests commercially beneficial.

There are efforts underway to grow a tourism industry, develop sustainable logging and the creation of hardwood products in country, as well as stamping out illegal deforestation, which the government says is a small but ongoing problem.

But the most important and reliable revenue stream requires the international community to pay for Gabon’s valuable carbon sequestration services.

This idea is novel, but not as far-fetched as it might sound.

Norway has already done a deal with Gabon worth over one hundred million USD to do just that, but Gabon needs a broad range of nations and other commercial partners to make it work.

Minister White described the challenge of continuing to maintain a less than 1% deforestation rate without the right kind of agreement in place.

“I think it would be very difficult for us, long term, without a real partnership between developed and developing countries, and without a business model and economic model that makes rainforests valuable for the people that live in them or who live in countries where they exist and have to make choices about land use.”

Subscribe to ClimateCast on Spotify, Apple Podcasts, or Spreaker.

He insists this is not a threat, rather an inevitability as the country develops.

But he is hopeful that eventually, what is good for Gabon’s economy is also good for the planet.

“These rainforests are helping to regulate the rainfall across Africa… they feed water into the Blue Nile.

“If you lose those ecosystem services, you lose the Blue Nile, you’ve got 100 million people in Egypt who can’t farm anymore, and they are heading into Europe.

“And so the rainforest is the heart and lungs of Africa, and it is maintaining the stability of the African continent.”

The Gabonese military fly us by helicopter, deep into the forest, to see this extraordinary and diverse ecosystem ourselves.

People we spoke to often referred to the forest as a “huge broccoli”, and as we flew above the canopy, that is just what it looked like.

At Lope National Park a group of rangers take us out to see some of the many animals that call Gabon home.

A group of 6 chimps wander across the savannah right in front of us. Buffalos graze, small monkeys leap between branches, and antelopes spring through the grass.

Some 60% of the world’s population of forest elephants live in this country, and a mother and calf emerged from the forest as they searched for food.

But these beautiful creatures, smaller and more skittish than their larger cousins, are an example of how, even in this forested country, climate change is having a direct impact.

Rising temperatures mean that trees are growing less fruit, which in turn pushes them towards villages to eat crops, depriving people of the ability to feed their families and generate income.

Ranger Donald Ndongo said: “They don’t have enough to eat.

“It’s a big problem and it is getting worse.”

At night we witness an example of this when a group of twelve elephants wander on to the grounds of the lodge where we are staying.

They shouldn’t be this close to humans because it makes them more vulnerable to poaching, but they are doing it more and more.

We meet Chantal Dibakou and Marie Christine Adegho on their plantation, surrounded by electrified wire.

Through a translator they tell me that elephants used to eat all their crops and that they didn’t have enough to feed themselves, but now they can live side by side.

Back in the capital Libreville, I meet Gabon’s chief climate negotiator for COP26, Tanguy Gahouma-Bekale.

He is the man tasked with convincing the international community that Gabon should be paid for its conservation efforts.

He says that the current payment system, known as REDD, rewards countries for reducing deforestation.

“We cannot be rewarded for this very well, because we do not have any deforestation to reduce.

“We think it is much more important for the international community, for the world, that this important forest in Gabon stays in place.

“So we need to be rewarded for all the effort, for all the politics that we put in place… we already protect almost 20% of our territory, we already manage a very strong forestry sector that respects the value of the forest.

“We are a high forest low deforestation country… and we need to continue in that way, we need to find support.”

I ask him if it is realistic to expect to be paid for a forest doing what a forest naturally does.

“We need to find an economic model for forests, to preserve them.

“Because of the need to become emergent countries… All tropical countries lose their forests (as they develop). It’s a fact.

Subscribe to ClimateCast on Spotify, Apple Podcasts, or Spreaker.

“Our forests are still standing. So what we say is now, help us to not become like other tropical countries, help us to continue our effort.”

The tension in Gabon symbolizes the bind that many resource-rich developing nations find themselves in.

Whether or not it is successful in its quest to make conservation truly profitable will send a message to the rest of the world about the merits of trying to do the same.