howtoearntips
Admin
posted on 2 weeks ago
11
views
Nobody can explain why this 'sinuous discrete aurora' happened.

By Brandon Specktor published 5 May 22

Nobody can explain why this 'sinuous discrete aurora' happened. 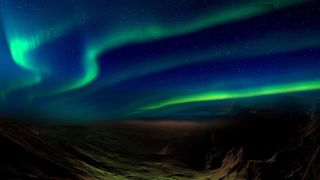 On clear Martian nights, long, snake-like ribbons of light may streak through the sky for thousands of miles. It's a pretty sight, according to new observations from the United Arab Emirates Mars Mission (EMM) — and it represents a strange new type of aurora never seen before on any planet.

Auroras — also known on Earth as the southern or northern lights — occur when charged particles from solar wind collide with molecules in a planet's atmosphere. Several different types of auroras have been detected on Mars, including planet-wide "diffuse auroras," which glow faintly through the entire Martian sky during intense solar storms, as well as patchy "discrete auroras," which only glow above certain spots of Martian crust thought to contain magnetized minerals, according to EMM.

This new type of aurora — which EMM researchers dubbed a "sinuous discrete aurora" — seems to be a strange mishmash of the others, the researchers said.

Visible only above certain tracts of the Martian landscape, the new type of aurora appeared during a recent solar storm when charged electrons swept over the Red Planet's thin atmosphere. As those particles surged down magnetic field lines in the atmosphere, long tendrils of light zigzagged across the sky from the planet's dayside to its nightside, spanning half of the planet's diameter, the EMM researchers said in an emailed statement.

The cause behind this newly discovered Martian aurora remains a mystery.

"The sinuous discrete aurora was a shocking discovery that in many ways has us scratching our heads and going back to the drawing board," Rob Lillis, a planetary scientist at the University of California, Berkeley who works on the Emirates Mars ultraviolet spectrometer instrument, said in the statement. "We have ideas, but no solid explanation for why we are observing intense aurora of this shape and at planetary scales."

The EMM's Hope orbiter, which has been surveying the planet from above since February 2021, observed the new aurora in ultraviolet light, using an instrument called EMUS (Emirates Mars Ultraviolet Spectrometer). According to the researchers, this type of light — which is invisible to the naked eye — shows where energetic solar wind electrons smashed into atoms and molecules in Mars' upper atmosphere, about 80 miles (130 kilometers) above the planet's surface.

—8 ways we know that black holes really do exist

—The 15 weirdest galaxies in our universe

While scientists have detected discrete auroras above certain patches of the Red Planet before, never have they seen one on such a "massive scale," the team said. The solar storm that propelled charged particles into the Martian atmosphere at a faster and more turbulent pace than usual is likely a key factor in this type of long, sinuous aurora, the researchers added.

Solar storm occurrences are predicted to increase over the next several years as the sun approaches its solar maximum — the period of greatest activity in the sun's 11-year cycle — in 2025. The EMM's Hope orbiter will continue watching for these newly discovered auroras in the meantime, while scientists dig into archival data collected by NASA and the European Space Agency to hunt for more examples of the snake-like streaks over Mars.

Brandon has been a senior writer at Live Science since 2017, and was formerly a staff writer and editor at Reader's Digest magazine. His writing has appeared in The Washington Post, CBS.com, the Richard Dawkins Foundation website and other outlets. He holds a bachelor's degree in creative writing from the University of Arizona, with minors in journalism and media arts. He enjoys writing most about space, geoscience and the mysteries of the universe.

Best Oldest Newest
Write the first comment for this!