By Ailsa Harvey published 5 May 22 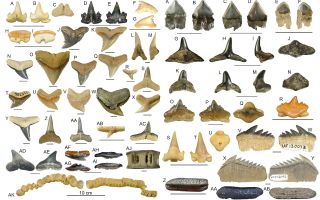 Specimens on the left of this image (A to AK) are from species in the order Carcharhiniformes. Those on the right (A to AB) are from the orders Squaliformes, Squatiniformes, Orectolobiformes, Hexanchiformes and Heterodontiformes. (Image credit: Victor J. Perez/ Calvert Marine Museum)

Florida is well-known among paleontologists as a rich source of shark fossils. But records of such finds around the state have not been examined systematically — until now.

Researchers recently analyzed thousands of fossil specimens in the collection of the Florida Museum of Natural History in Gainesville, and in doing so, added 20 new shark species to the state's fossil record.

Victor Perez, an assistant curator of paleontology at Calvert Marine Museum in Solomons, Maryland, launched the fossil investigation to identify and fill any gaps in Florida's chondrichthyan records. Chondrichthyans are a large and diverse class of fishes with cartilage skeletons, such as sharks and rays.

"This study recognized 40% more taxa than the previous review of Florida's chondrichthyan fossil record," Perez wrote in the study. "While the documentation of the chondrichthyan fossil record of the Florida Platform [an underwater plateau supporting the Florida peninsula] has improved significantly, this study found numerous gaps in sampling where additional taxa are likely to be recovered."

The study authors examined a total of 107,698 shark and ray fossils from the state, which were part of the fossil collection at the Florida Museum. They recorded 70 species, of which 20 were added to Florida's chondrichthyan fossil record for the first time.

Florida holds the unofficial title of "shark tooth capital of the world" due to the quantities of fossil shark teeth that are found there, according to Perez. Because sharks' skeletons are mostly cartilage, they typically don't mineralize to produce fossils. By comparison, their high-calcium teeth are frequently preserved in the fossil record, according to the Florida Museum.

Many mackerel shark species, which had long, thin teeth suited to catching fast-moving prey, became extinct during this time, likely because the climate cooled, researchers reported in 2019 in the journal Proceedings of the National Academy of Sciences. That enabled ground sharks — which have specialized serrated teeth for catching a wider variety of prey — to populate ecosystems that mackerel sharks once dominated, as competition for resources declined. Ground sharks' success story continues to this day; some of the most familiar modern shark species, such as hammerhead sharks (in the family Sphyrnidae) bull sharks (Carcharhinus leucas) and tiger sharks (Galeocerdo cuvier), are examples of ground sharks.

—Biggest sharks in the world

A large number of the specimens that the scientists analyzed for the study had been donated to the museum by amateur fossil hunters, and represent sharks and rays that lived in various locations across the state between 45 million and 10,000 years ago.

In Florida, fossils from the Eocene and the Oligocene are poorly documented, and the researchers' findings "will be a great resource to help collectors recognize if they have something new," Calvert Marine Museum representatives said in a statement.

The findings were published April 18 in the journal Paleobiology.

Ailsa is a staff writer for How It Works magazine, where she writes science, technology, history, space and environment features. Based in the U.K., she graduated from the University of Stirling with a BA (Hons) journalism degree. Previously, Ailsa has written for Cardiff Times magazine, Psychology Now and numerous science bookazines. Ailsa's interest in the environment also lies outside of writing, as she has worked alongside Operation Wallacea conducting rainforest and ocean conservation research.

Best Oldest Newest
Write the first comment for this!